Warning You are using a web browser that we do not support. Our website will not work properly. Please update to a newer version or download a new web browser, such as Chrome or Firefox.

Click on the linked example titles to view ConSurf results and the rotatable molecules colored according to ConSurf conservations scores, or click on the static figures to see them in greater detail.

Here, both variability and conservation reflect function. Functional variability is seen in the peptide-binding groove (Fig. MHC_1, accomodating chain P). Allelic diversity in the population, concentrated in the inner surface of the groove, enables the population to present the maximal range of foreign (e.g. viral) peptides to T lymphocytes, for defensive immune responses. Conserved patches suggest functions, some of which may not yet be identified. Gln226 is known to be important in binding the CD8 coreceptor of the T cell (Kern et al.). Conservation is also evident in the interface binding chain B (Fig. MHC_2). Fig. MHC_3 shows a general view of the Protein explorer graphic page.
More on MHC structure is at the Lehninger and Martz sites.

The potassium channel is an integral membrane protein with sequence similarity to all known K+ channels, particularly in the pore region. In Fig. 1bl8_1, we can see a general view of the conservation pattern of one of the four identical subunits (chain A, all other subunits in strands, K+ atoms yellow), which shows that ConSurf clearly detects the conservation among the amino acids facing the pore region (critical K+ signature sequence aa). Fig. 1bl8_2, shows in greater detail the the contact between a K+ atom and the highly conserved G77, Y78 and G79 amino acids, which are known to be absolutely required for K+ selectivity.
More on the the structure and function of the potassium channel at (Doyle et al.)

Proinsulin is the prohormone precursor to insulin made in the beta cell of the islets of Langerhans. In humans, proinsulin is encoded by the INS gene. Proinsulin is processed by a series of proteases to form mature insulin. During this process the Signal peptide (1-24) and the C peptide (57-87) are removed. The remaining peptides (Insulin A Chain and Insulin B chain) are connected by disulfide bonds and constitute the mature insuline. In figure INS_HUMAN (located below) the ConSurf analysis for INS_HUMAN is shown. The figure reveal that the Insulin B (25-54) and Insulin A (90-110) peptides are highly conserved. In addition the disulfide bonds (CYS31-CYS96, CYS43-CYS109 and CYS95-CYS100) which are crucial to the structure of the mature insuline are also highly conserved compared to the removed peptides. More about the human proinsulin at (Nicol et al), (Oyer et al.) and (Ko et al).
In addition using the ConSurf result page the user can also review the projection of the conservation scores calculated for the sequence onto the insulin structures. 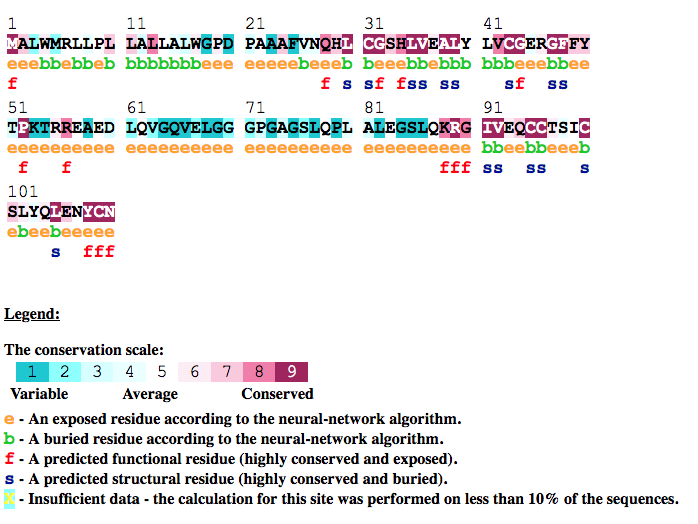 Gal4 is a transcription factor in yesat. This protein is a positive regulator for the gene expression of the galactose-induced genes such as GAL1, GAL2, GAL7, GAL10, and MEL1 which encode for the enzymes used to convert galactose to glucose. It recognizes a 17 base pair sequence in (5'-CGGRNNRCYNYNCNCCG-3') the upstream activating sequence (UAS-G) of these genes.

ConSurf analysis (Figure GAL4, below) reveals, as expected, that the functional regions of this protein are highly conserved. For example, all the cysteins that form the Zn(2)-C6 DNA binding domain (CYS11, CYS14, CYS21, CYS28, CYS31, CYS38) (Pan and Coleman, 1990) receive the highest conservation scores. Likewise, PRO26, that is known to be central for DNA binding (Johnston, 1987) is also highly conserved according to our analysis.
In addition, other amino-acids residues, which are in contact with the DNA (i.e., GLN9, LYS17, LYS18, LYS20, ARG15, LYS23) (Marmorstein et. al. 1992) are also relatively conserved. 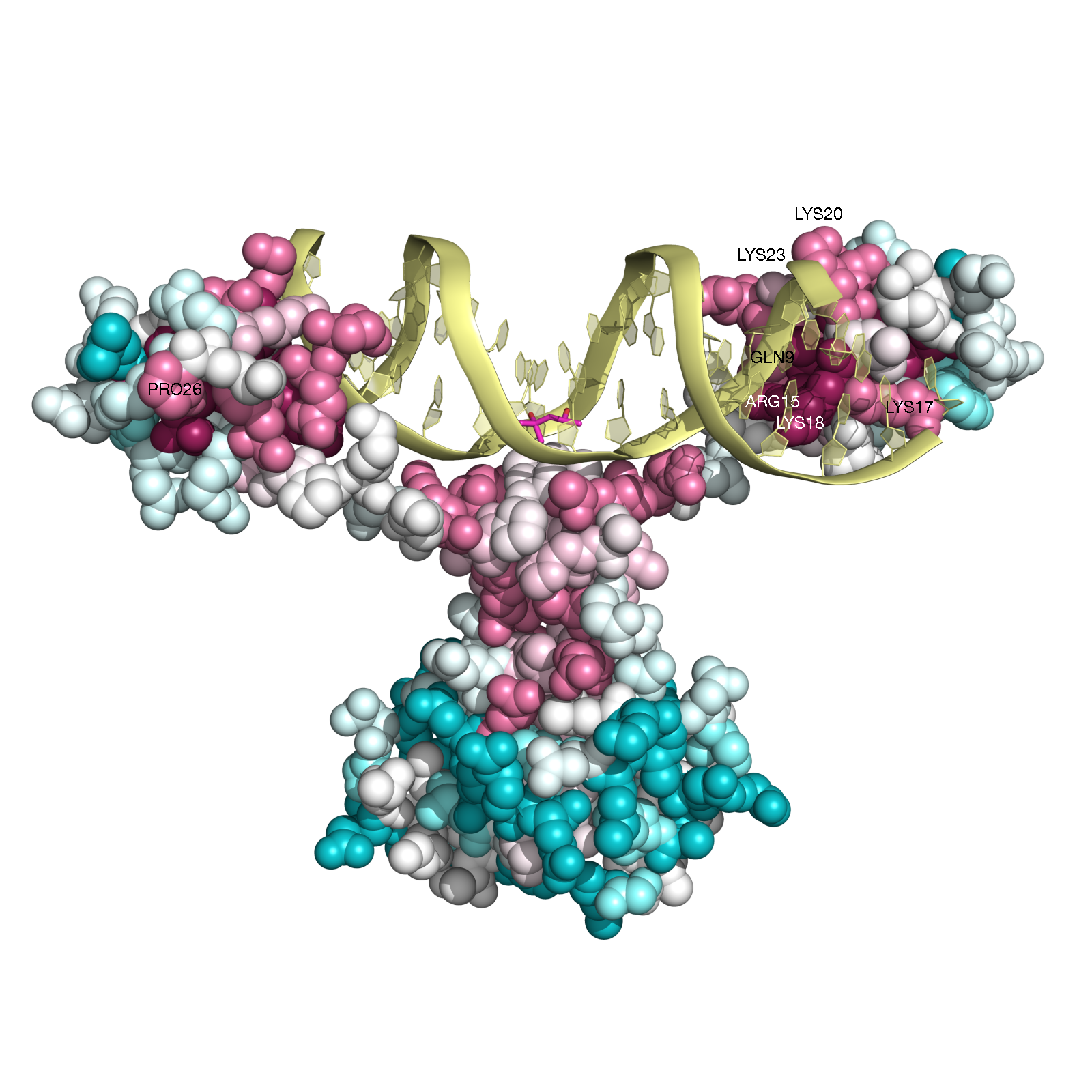 For RNA sequence queries, ConSurf offers the possibility to predict the secondary structure. Structures are predicted using the RNAfold program of the Vienna package (Lorenz,R et. al. 2011, Mathews,D.H. et. al. 2004), and the structure with the lowest free energy is selected. The ConSurf conservation grades are mapped onto the predicted secondary structure. Correlating the evolutionary data with the structural model offers the means to quickly detect functional regions within the RNA query. To exemplify this feature, we analyze the well-studied Phe-tRNA molecule from yeast (Figure Phe-tRNA A).

The results show that some bases in the TΨC and D loops are assigned with particularly high conservation grades (colored in magenta). Some of these positions are known to be of structural and functional importance (Zagryadskaya E.I. et. al 2003, Guy,M.P. et. al. 2014).

Figure Phe-tRNA B demonstrates the projection of ConSurf grades onto the 3D structure of the Phe-tRNA molecule (PDB id: 1EHZ chain A), and further highlights the importance of the evolutionarily conserved positions. 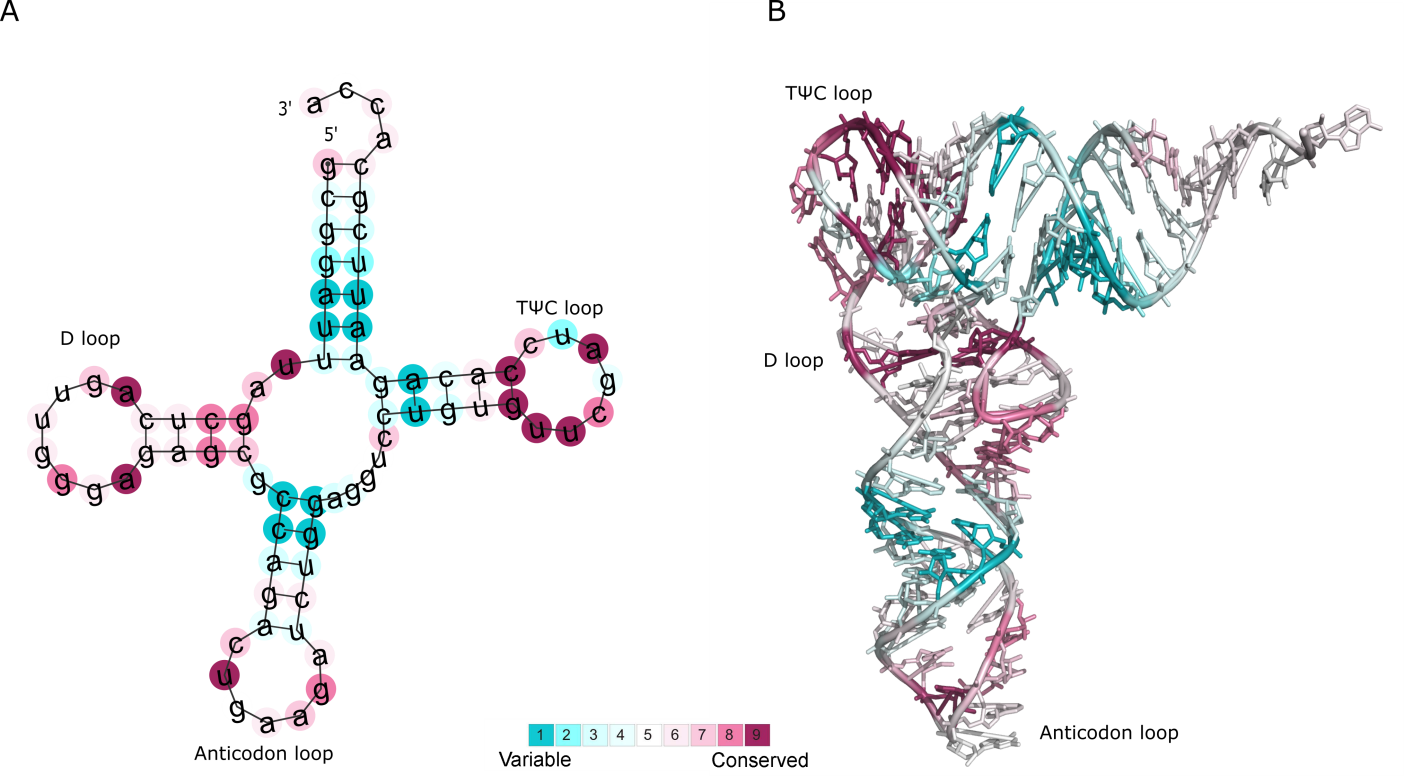 The new version of ConSurf automatically suggests the possibility to map the calculated evolutionary conservation grades of the amino acids not only onto the single asymmetric unit chain, which is often deposited in the PDB, but also on the protein assembly as predicted by PISA (http://www.ebi.ac.uk/pdbe/prot_int/pistart.html).

This new feature is demonstrated by analyzing the 3D structure of the β subunit of DNA polymerase III from Escherichia coli (Figure 2POL). This protein functions as homo-dimer (PDB ID: 2POL), and as anticipated, most of the residues at the inter-subunit interfaces (Kong, X.P. et. al. 1992) are highly evolutionarily conserved (Leu108, Lys74, Ile272, Leu273, Glu300, Glu304). The interfaces between the two subunits of the homodimer (on both sides of the dotted line) are highly conserved, as well as the internal face of the ring, which interacts with the DNA. 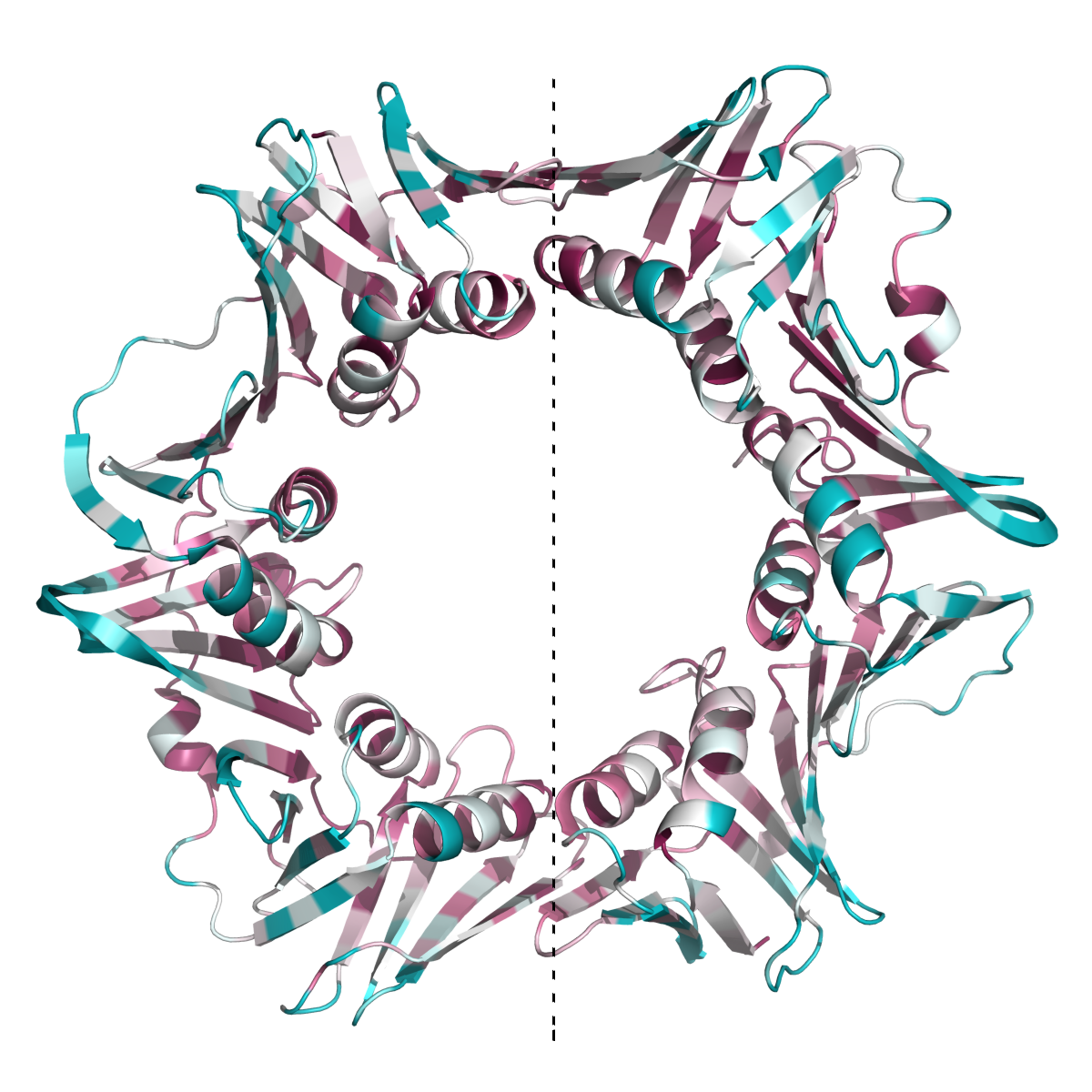